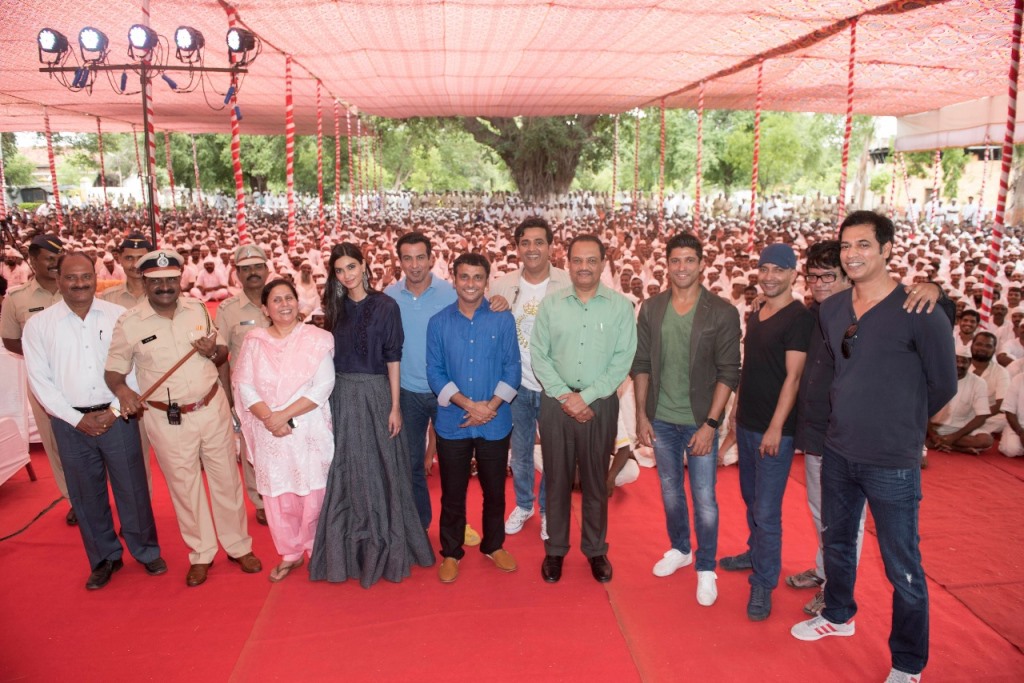 “The media team is still an hour away” – we were told by the event team at 11.30 AM. This doesn’t sound good considering the audience has been waiting since 11 AM and the event is supposed to start 12 noon sharp.

And the audience – more than 4000 inmates of the Yerwada Central Jail, Pune! 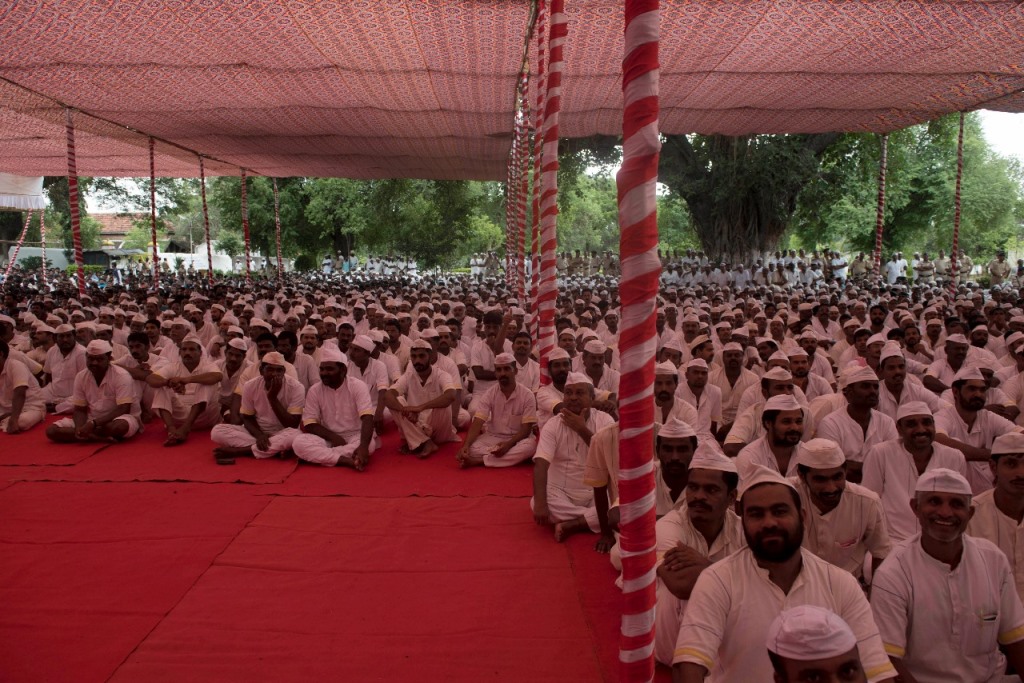 If this isn’t nerve-wracking enough, we have the top cops of Maharashtra Prisons glaring at us*. Well…almost.

Some of the inmates are getting restless, some are getting up to go take a leak. The officers and constables overlooking are having a tough time keeping the crowd quiet.

Then Dy Superintendent Vasnik has a bright spark of inviting a talented inmate, Nitin Arole to sing a song. As soon as Mr Arole comes in, the crowd gives him a roar of approval. Mr. Arole doesn’t disappoint and gives a nervous but effective rendition of “Tu is tarah se meri zindagi me..”.

The song is over and there’s no sign of the media team or the stars! I’m called over to the main entrance of the prison, only to thankfully realize that the media team has reached. As I step outside to receive the team, two huge SUVs drive into the prison outside compound and we can see the “talent” sitting eager to get the show going. There’s a flurry within the officers as the stars (aka Talent) get down from the SUVs and are introduced to the Superintendent U T Pawar who’s been patiently waiting for them. 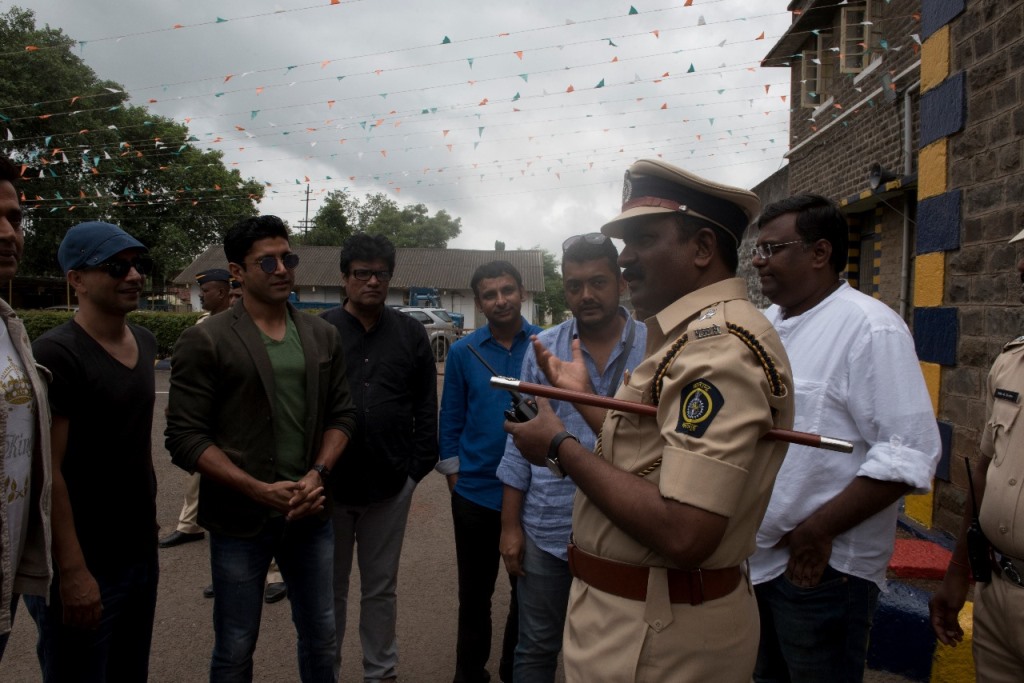 The talent is quickly escorted inside the prison premises, where everyone (yes, even the stars must!) registers in the prison entry diary and given individual tokens. 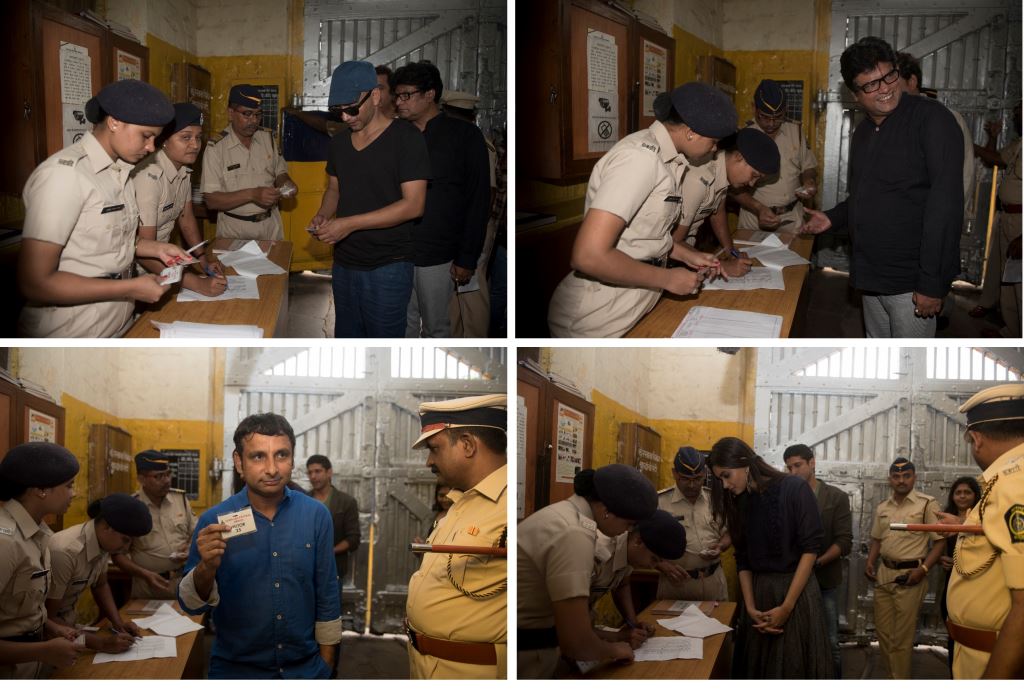 These tokens are not to be lost. If you lose them, you don’t get out of the prison!

While the talent is being introduced to the ADG, Dr. Bhushan Kumar Upadhyay and the DIG Swati Sathe, outside in the compound the media team too drives in and is quickly registered with the cops and whisked away to the venue deep inside the heart of the prison.

The prison authorities have kept every little detail in mind and very thoughtfully show the talent to the memorial cells where India’s freedom fighters like Mahatma Gandhi, Motilal Nehru and Jawaharlal Nehru were imprisoned during the British Raj. The talent of course was very touched to be able to see these historical places. 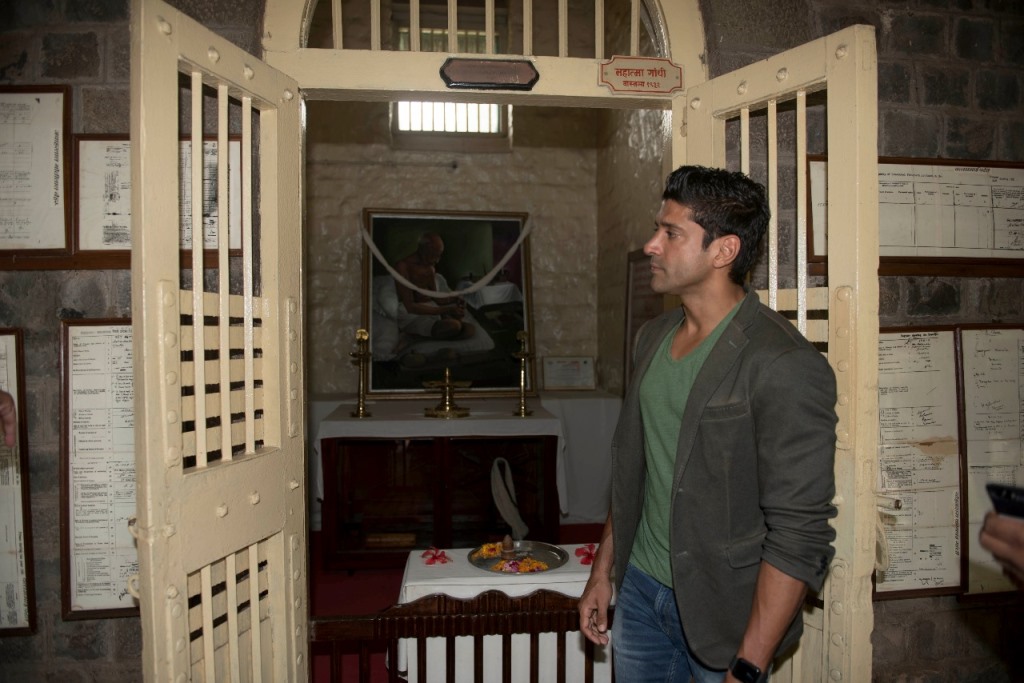 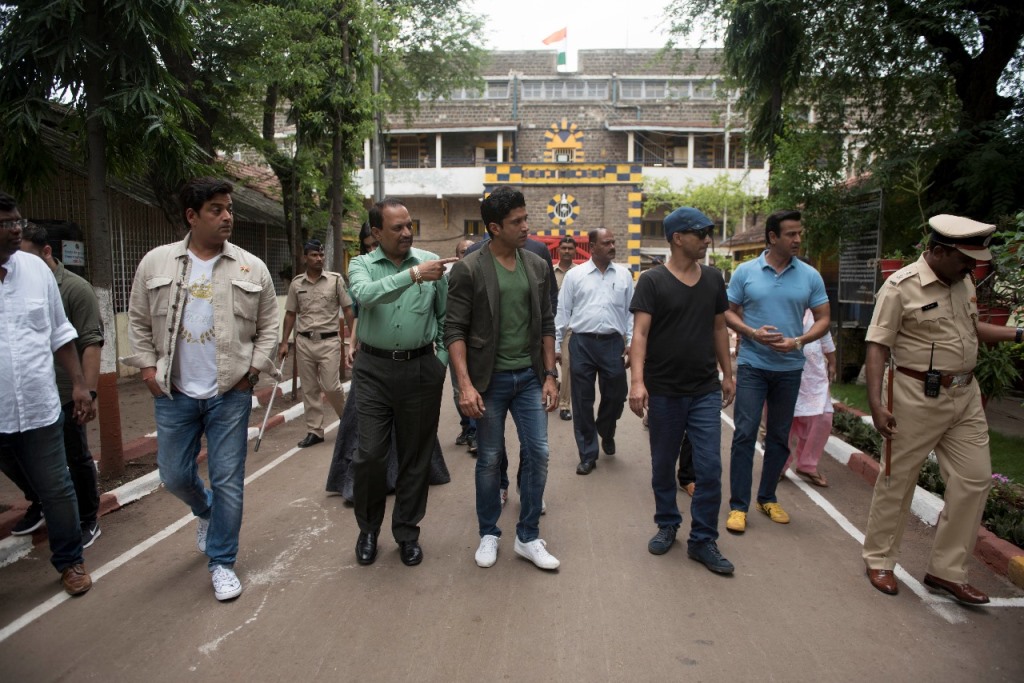 While the talent was being given this tour, we could hear the Marathi song “Jhingaat” from the movie Sairat being belted out by one of the prison constables himself, Mr. Mali and the mammoth crowd singing along to the high energy song. All bodes well, we thought!

Post the tour and as the talent nears the waiting crowd, we can see the necks turning and the increased noise and a sudden burst of applause as the talent walks in to the main venue. Farhan Akhtar very sportingly shakes hands with some of the inmates sitting nearby and Ravi Kishan waves out to the crowd who respond back enthusiastically. We can see smiles all around! 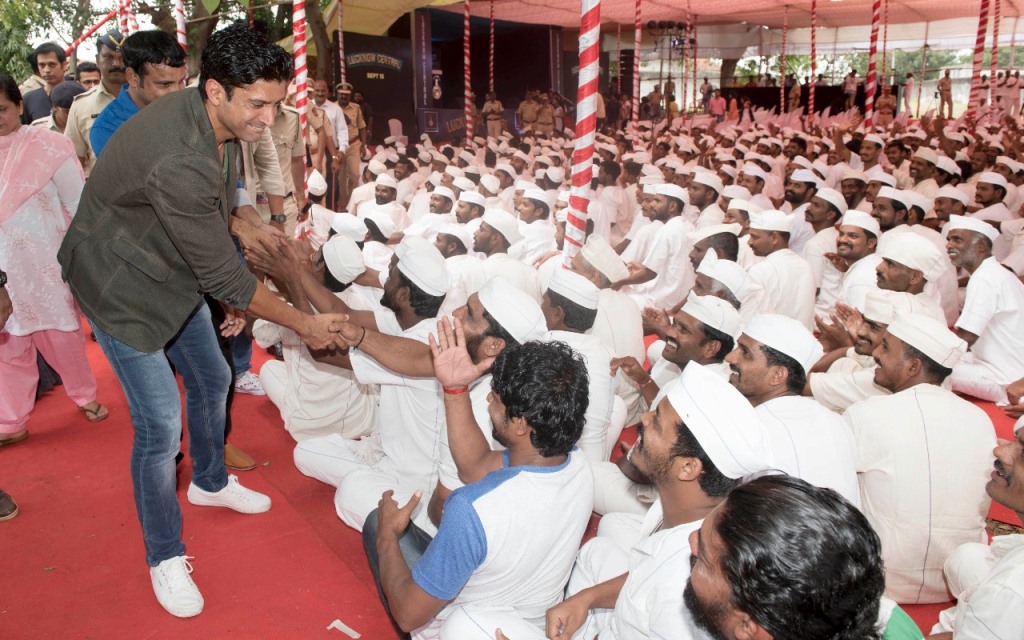 The stars are seated down in their respective seats and the show starts – finally!

RJ Neha takes the stage, welcoming the audience, the stars & the officials – starting by calling on the ADG and DIG to start the event. ADG Dr. Upadhyay doesn’t disappoint with his ready repertoire of “sher-o-shayari” and the iconic dialogue from the movie Sholay – “Hum angrezon ke zamaane ke jailer nahi hain!” The crowd can’t help but applause in approval.

The stars introduce themselves & their respective roles in the film “Lucknow Central” with more than one expressing their surprise at the reformative & clean environs of Yerwada Central Jail. The one common theme that all the stars reiterated was “Dream free! Dream big!”

Moving on with the show, inmate Mr. Nitin Arole started the music session with a soulful rendition of “chahunga mein tujhe saanjh savere” and the crowd couldn’t help but cheer along.
And wasting no further time, the song from Lucknow Central, “Teen Kabootar” for which this event was planned was played for the first time in public. The uniqueness of this song is that, probably the first time in Hindi cinema, a song has absolutely no musical instrument used in it. Check it out!

Farhan Akhtar quickly invited Inaamulhaq and Deepak Dobriyal for an impromptu performance of the sound effects that these actors learnt and performed in the movie for this song – Inaamulhaq using empty plastic bottles and Deepak Dobriyal using only his hands to make music! The music composer Arjun Harjai deserves all credit for this catchy & unique number! 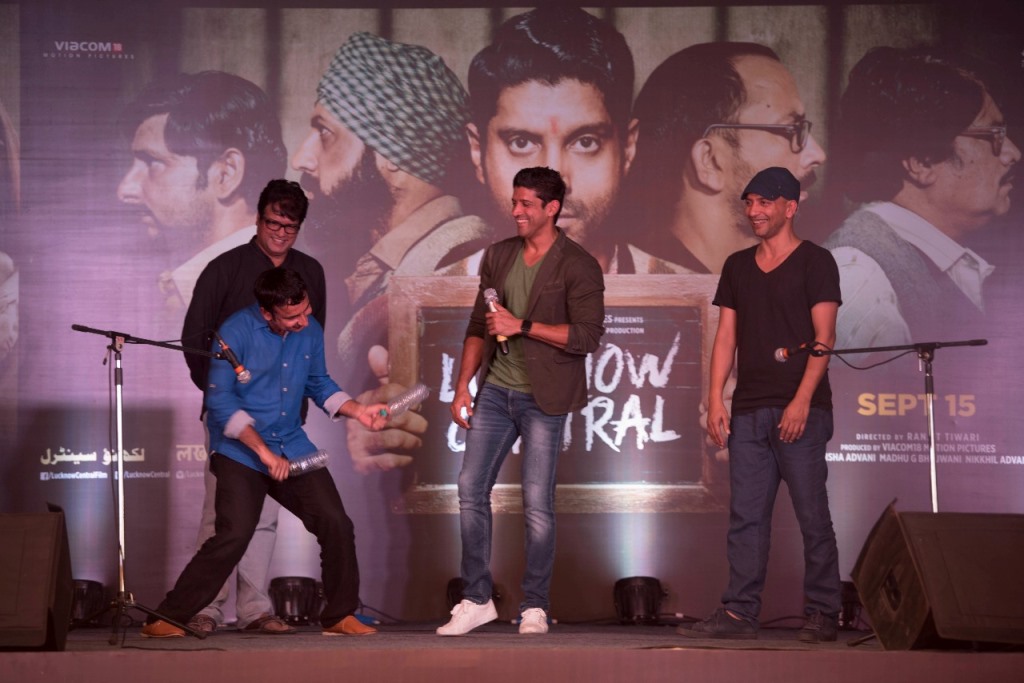 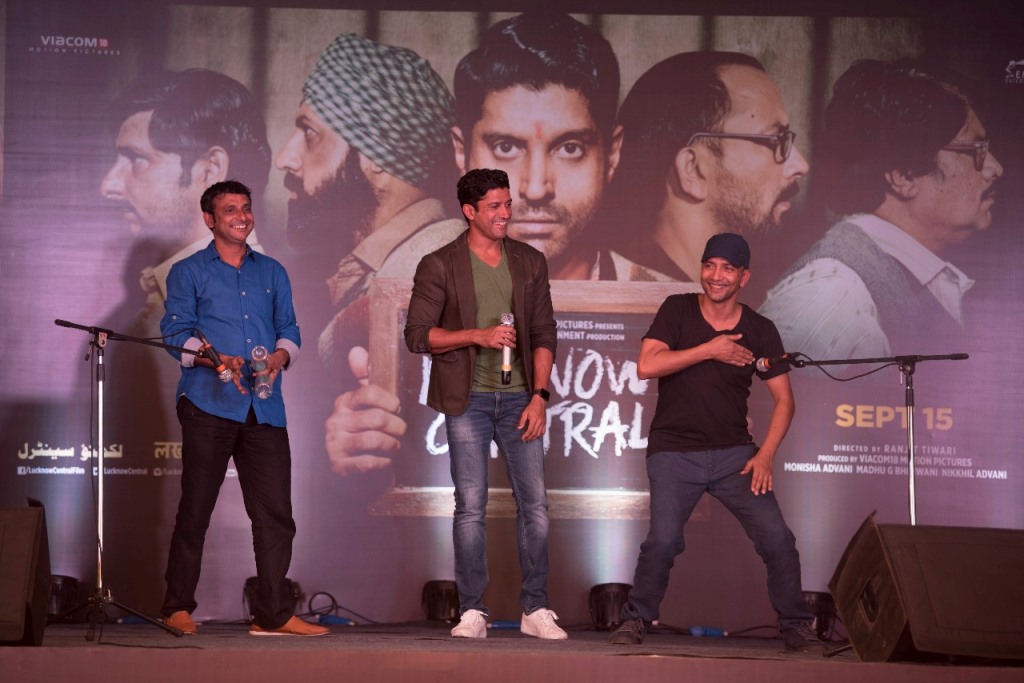 Then came in Constable Prabhakar Mali, who brought the crowd to its feet with a power packed performance of the Marathi song “Bring It On!” This was followed by a touching performance by Constable Ms. Pratibha who sang “Aye mere watan ke logon”.

Then came the moment which everyone was waiting for, the super talented Farhan Akhtar took stage and performed “Meer-e-karwan” from Lucknow Central and “Atrangi Yaari” from the movie Wazir. Of course, no Farhan Akhtar stage performance is complete without singing “Rock On”. For this, Farhan Akhtar invited inmate Arole, and constables Mali & Ms. Pratibha for an impromptu jamming session. The crowd joined in too, to chime in “Rock On” with the quartet! 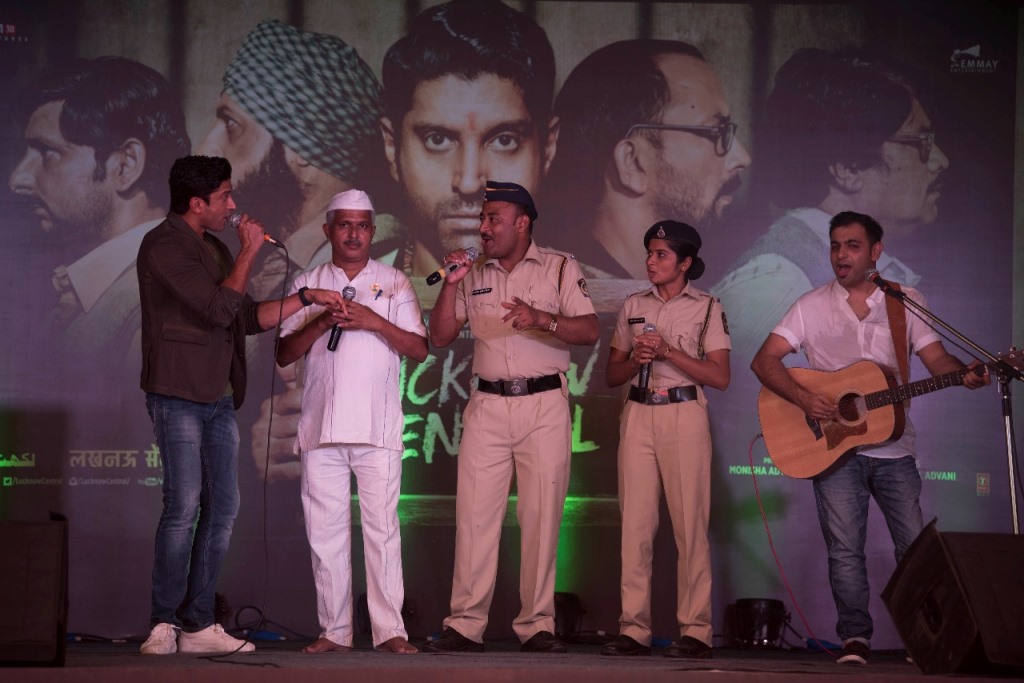 With this, ended the music launch of the song “Teen Kabootar”. The stars were invited onto the stage along with the officials for one last photo session and closing words by Superintendent U T Pawar and ADG Dr. Upadhyay.

With the event done, the prison officials were gracious enough to invite the stars and key members of the event team, including Filmapia, for a quick meetup in the Superintendent U T Pawar's cabin. The officials offered biscuits and sandwiches made within the prison by the inmates - to give the stars - a taste of the prison, so to say! 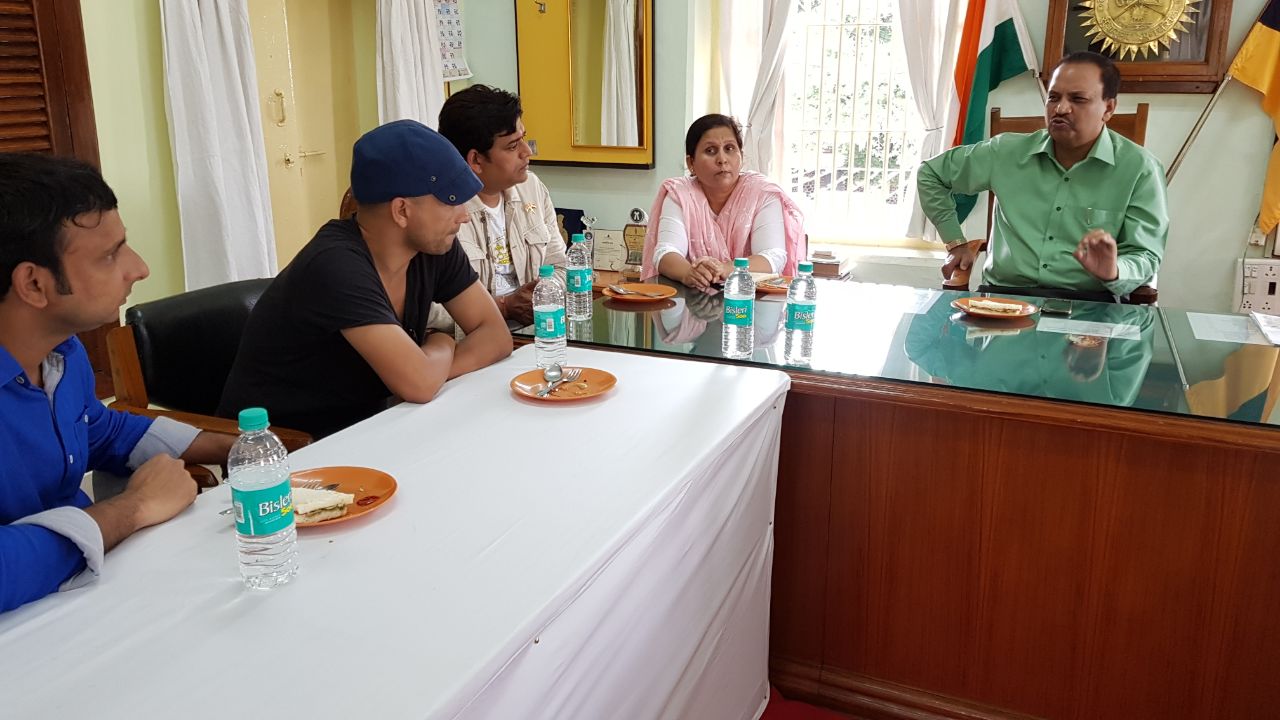 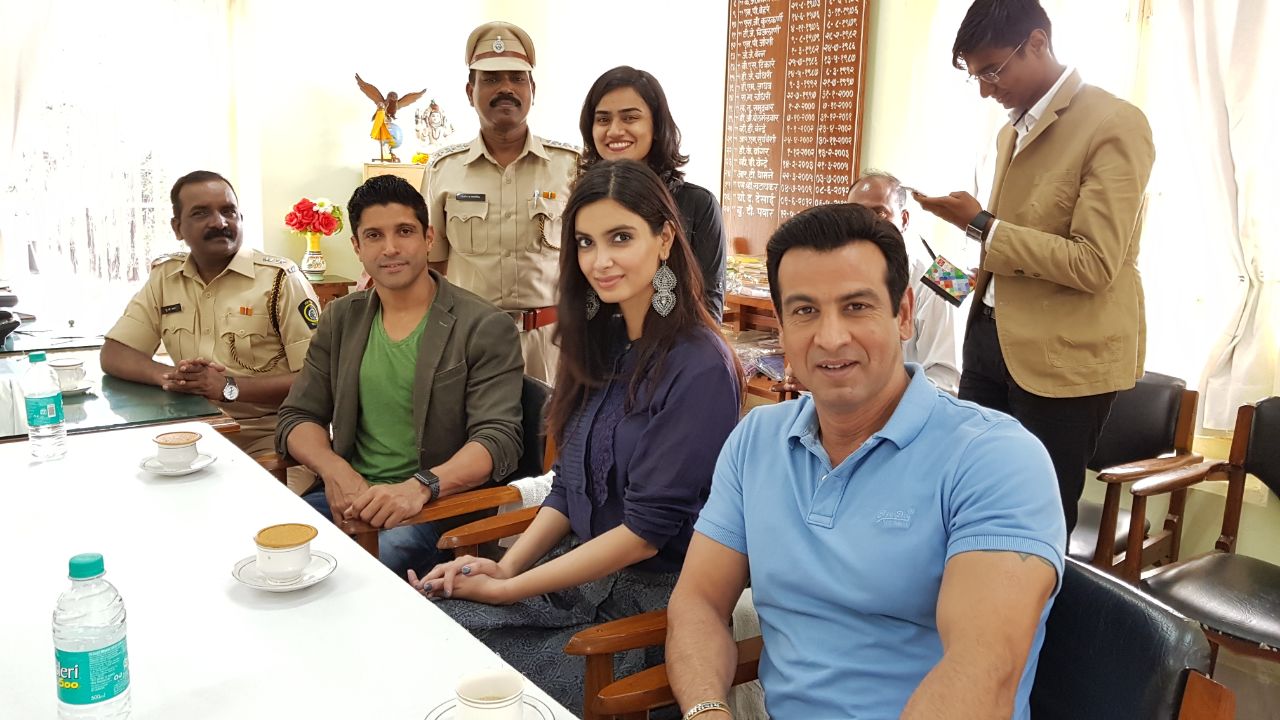 Supdt U T Pawar has been an admirer of Farhan Akhtar's performance in Milkha Singh's biopic "Bhaag Milkha Bhaag" for long. Farhan Akhtar was hence felicitated by ADG Dr. Upadhyay for this stellar role. If this was not enough, the officials even gifted all the stars small mementos, all handcrafted items by the inmates. The stars were, needless to say, touched by this gesture. 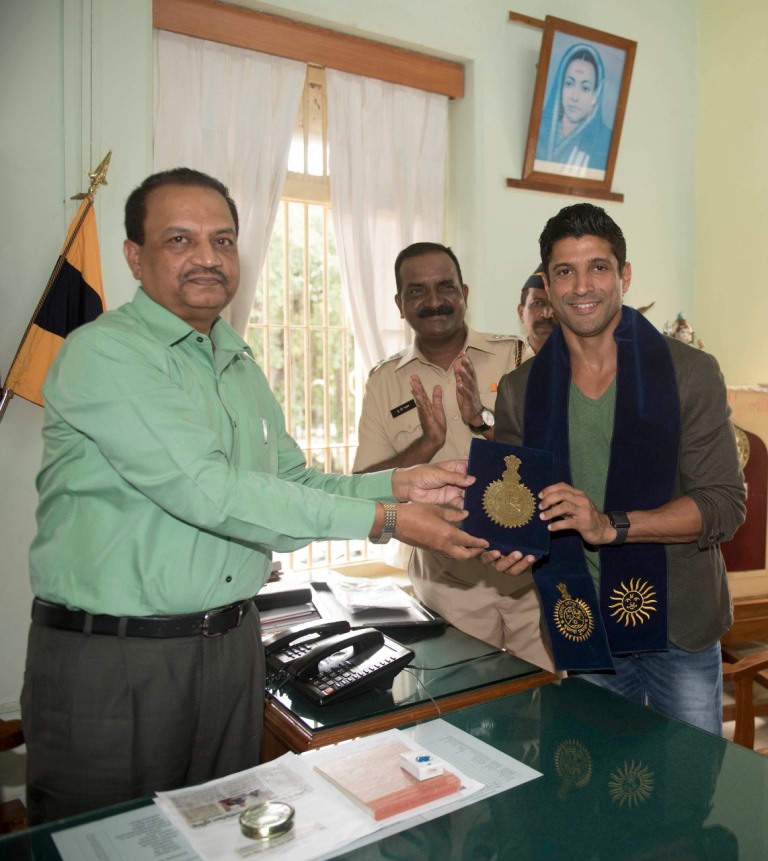 The stars too, obliged back by offering to pose for photographs and selfies with some of the officers and constables. Smiling faces on again! 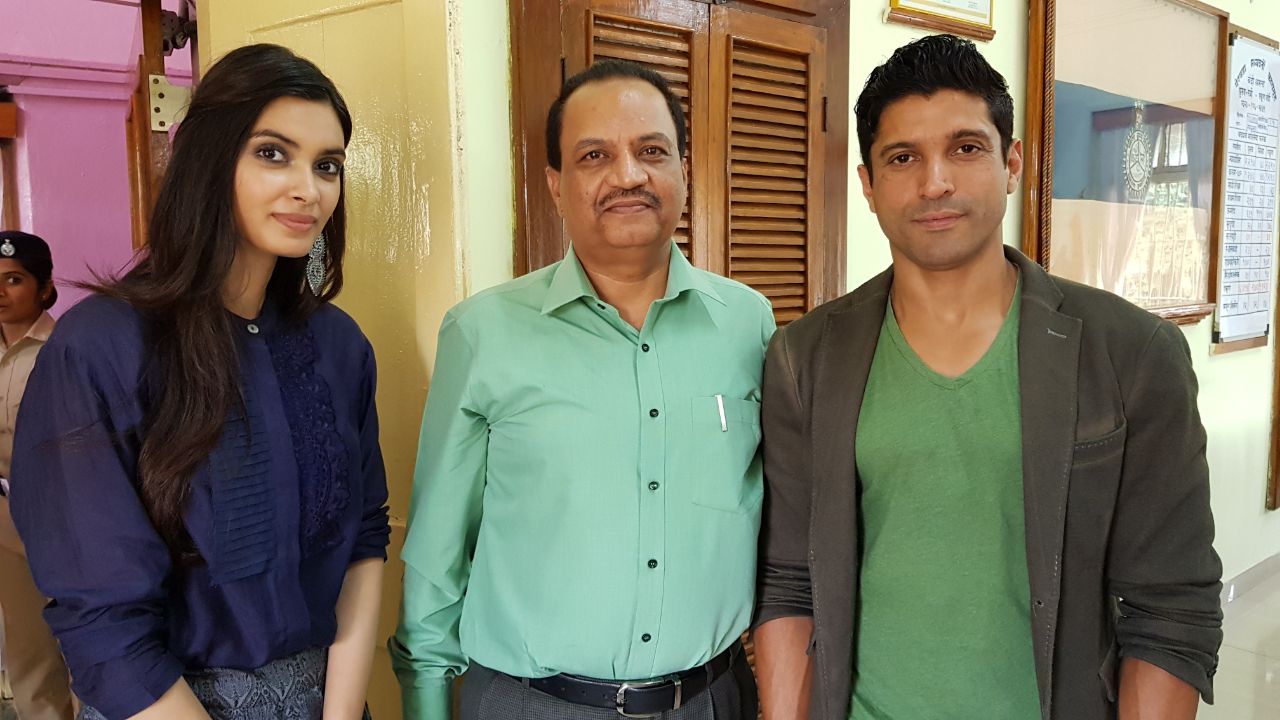 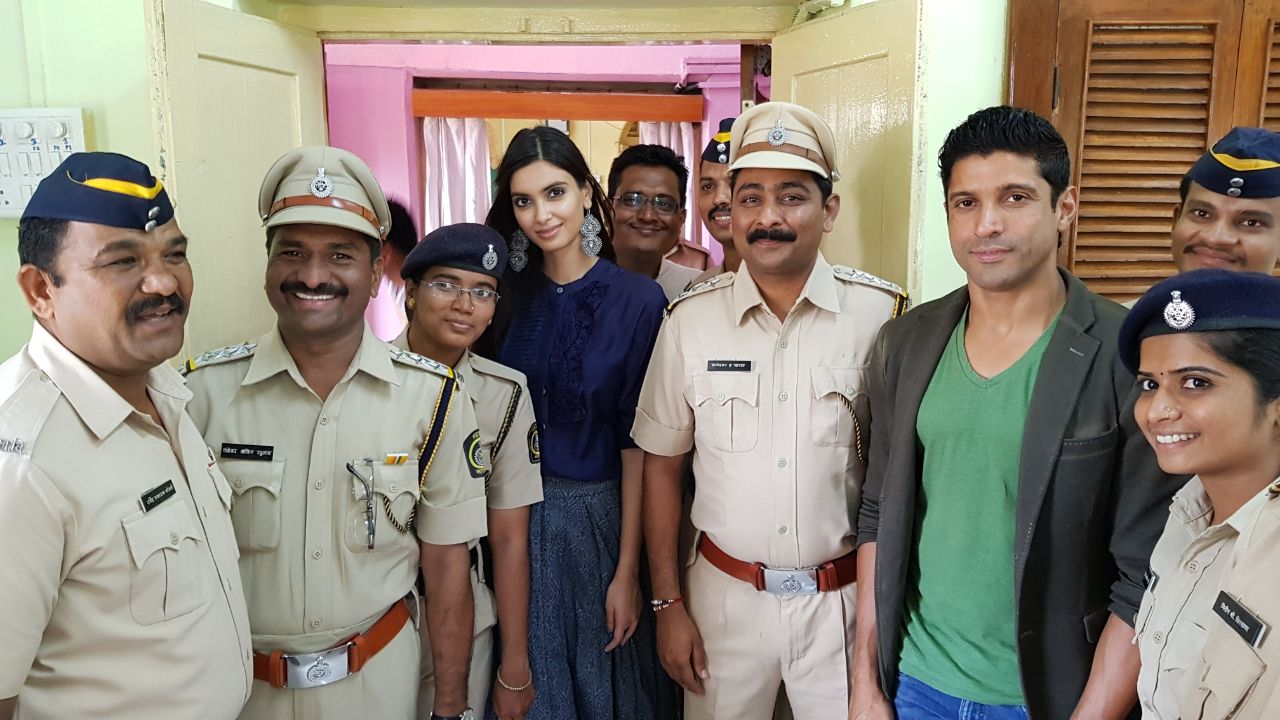 With this done, the stars leave the premises (of course returning their individual tokens given) and the officials and not to forget the event team heave a smile of relief for an event that got done just fine!

A special note for RJ Neha who did a splendid job on conducting the event on stage!

*Filmapia was the location enabler for this event - procured permissions & related procedures. Seen in the picture here is Robust Entertainment Team and the Filmapia Team 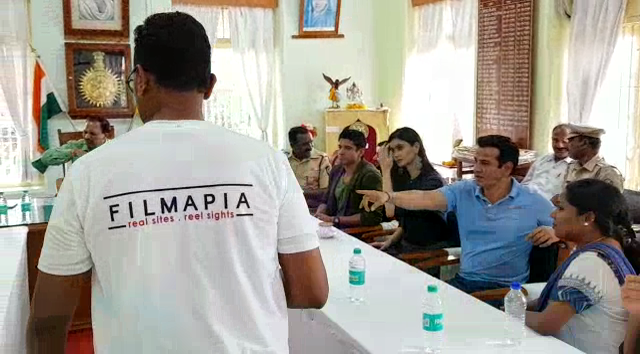 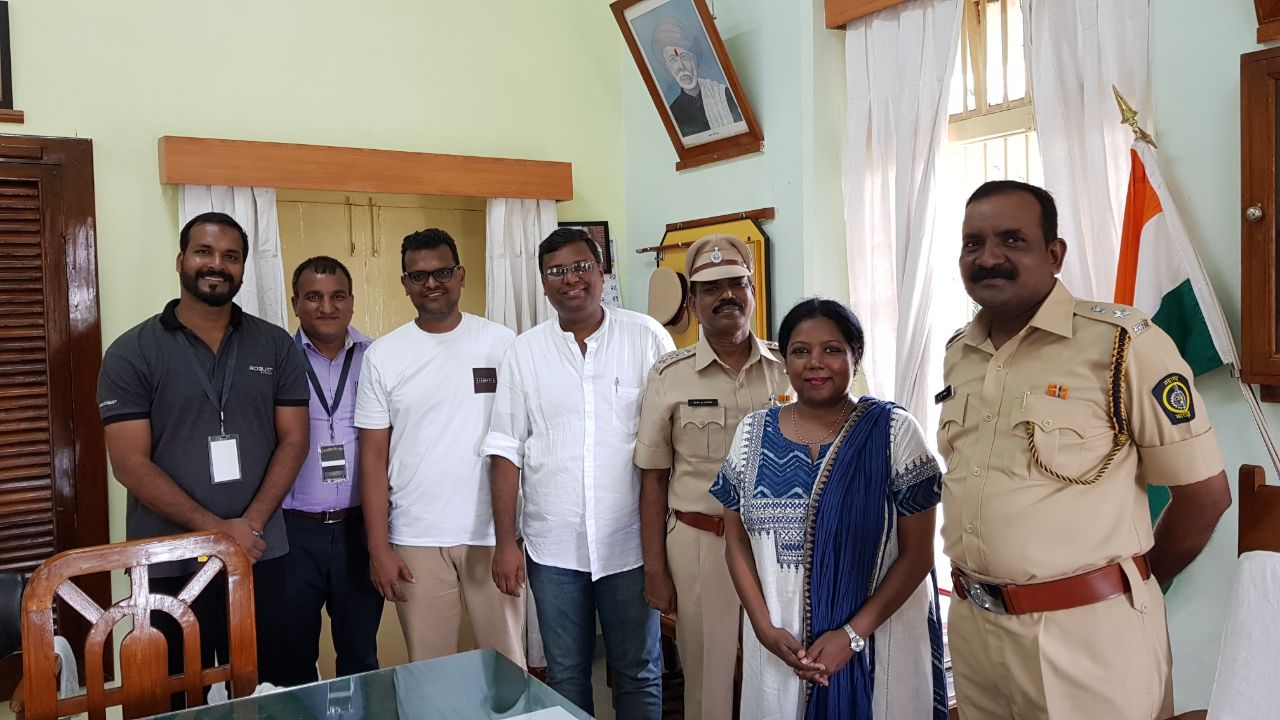