Resumption of Film Shoots & Events in India. With the second wave of Covid, different states in India are having different lockdown phases. There is uncertainty and lack of clarity as to when things will restart. This article attempts to answer and track the same

Covid wave 2 has severely impacted the Filming & Event industry in India. Things had just about restarted in the fag end of 2020 and early months of 2021, when the second wave has hit India severely, affecting the schedules of every film shoot/event in India, not to forget the massive hit on the livelihood on the people involved.

With different states following different lockdown phases, there is no central data point which records when things will resume. This article intends to keep a track of the resumption of Film Shoots/Events in India, and the hope for livelihood and action to restart. 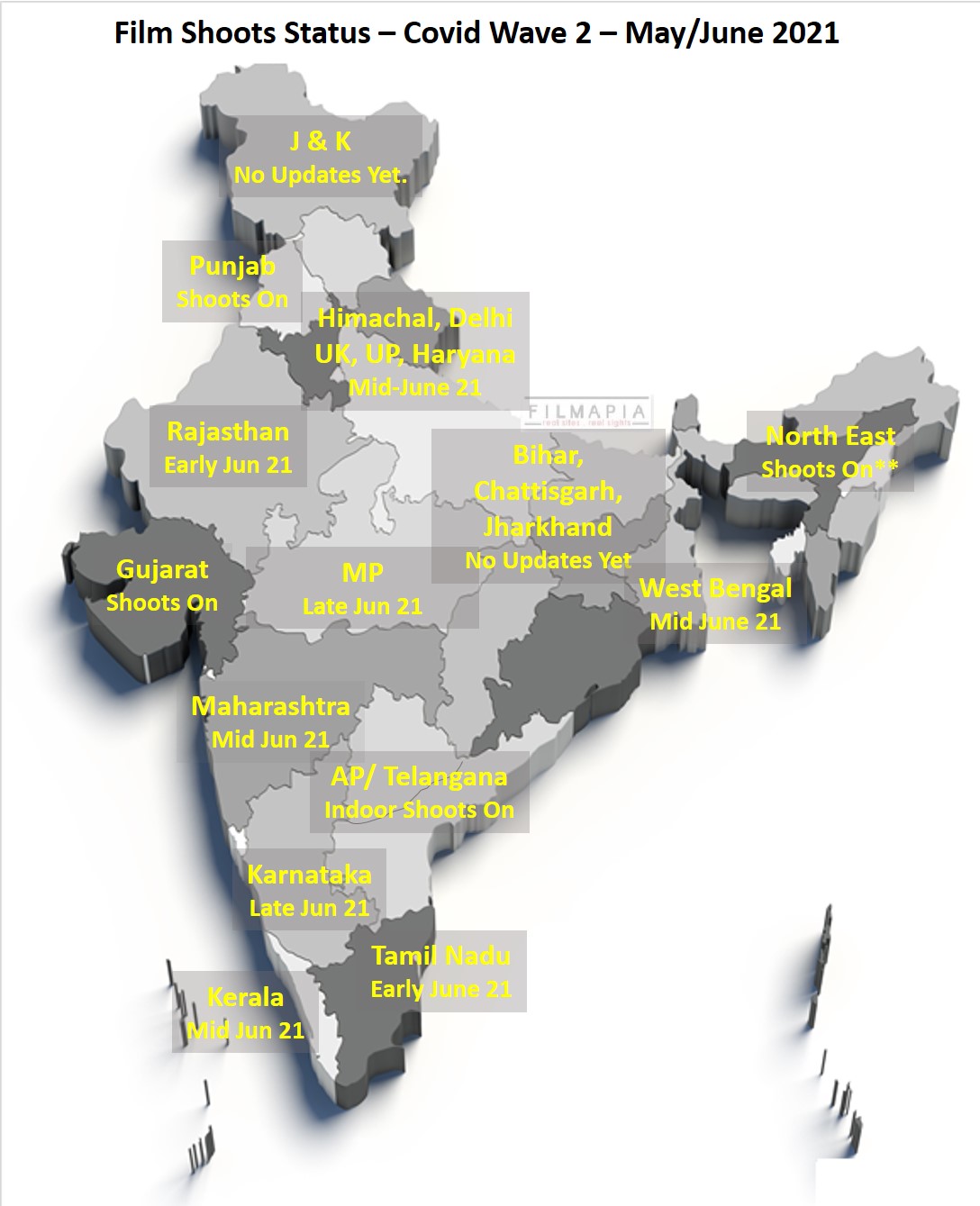 Jammu & Kashmir : No updates yet.

West Bengal : Partial lockdown from 1 June 2021 onwards. So potentially some shoots might be allowed.

Odisha : No updates yet.

North East**: Shoots are allowed in Sikkim as of now with minimal crews and with RTPCR negative reports .

Madhya Pradesh : No shoots allowed currently. No date yet on restart of shoots.

Bihar, Chattisgarh, Jharkhand : No updates yet.

Gujarat : Shoots are on with minimal crew and mostly in private properties such as studios and resorts.

Maharashtra* : Pretty fluid situation right now. Covid cases are coming down but no clarity on when the shutters will open, so to say. As of now, tentatively mid or late June 2021.

Goa: No shoots allowed currently. No date yet on restart of shoots.

Andhra Pradesh/ Telangana : Shoots are on with minimal crew and mostly in private properties such as studios and resorts.

Though there are reports in pretty much all states, that there are quite a few shoots going on in private estates (like resorts, big studios, farmhouses, etc.). Albeit with minimal crew & sometimes the local authorities demanding RTPCR negative reports, and covid related precautions. It's all hush-hush.
Except for very few places in India (like Sikkim & some of North East), almost all states are not allowing outdoor shoots anywhere.

Please mail us @ info@filmapia.com or drop us a message on any of our social media handles, if you have updated information with you.